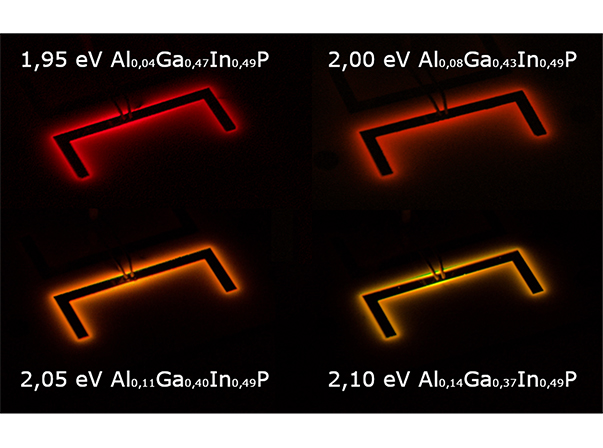 Currently, the absorber material of the top subcell of the quadruple-junction solar cell consists of gallium indium phosphide (GaInP), which has a band gap of 1.90 eV. This cell is thus able to convert light up to a wavelength of 650 nm (red) into electrical energy.

The optimal band gap of the uppermost subcell in a quadruple cell is approx. 1.95 eV and can be realised with aluminium gallium indium phosphide (AlGaInP) with approx. 4% Al. The higher the Al content in AlGaInP, the higher the band gap and thus the achievable open circuit voltage (Voc). For maximum efficiency, a high open-circuit voltage is important.

However, the more gallium in AlGaInP is replaced by aluminium, the more defects can arise in the crystal, which are manifested by lower luminescence (radiative recombination) and a lower Voc. To minimise these defects, the growth parameters for AlGaInP have now been optimised to such an extent that this material system promises a voltage gain of 40 mV for the first time when used in a quadruple-junction solar cell.

For a six-junction solar cell, the band gap would have to be increased somewhat further (>2.00 eV), which corresponds to an Al content in AlGaInP of 8% Al. Here it is still true that the defect density increases with increasing Al content and new growth conditions must be found. The first growth experiments of cells with band gaps up to 2.10 eV were successful.

If such an AlGaInP cell is excited by electricity, it begins to glow in different colours depending on the band gap; it functions as an LED. The higher the band gap of the material, the smaller the wavelength of the emitted light. The resulting colour change is shown very nicely in the article picture, in which the emitted colour of the cells changes from red (1.90 eV GaInP) to orange (2.00 eV AlGaInP) to yellow (2.10 eV AlGaInP).